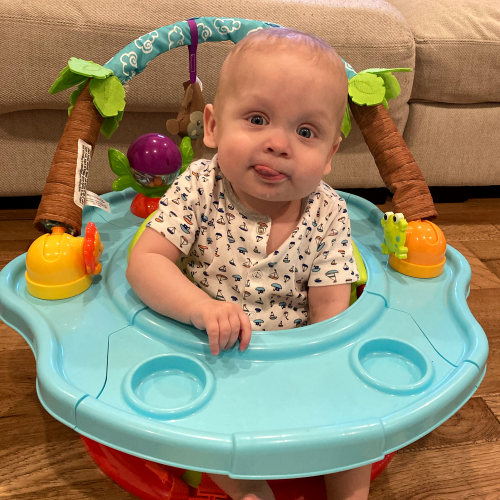 From the moment Raylan was born, he fought for his life. Born with cardiomyopathy, Raylan was placed on the transplant list at seven weeks old. His parents, Bonnie and Craig, could only sit and wait for answers about their baby. After agonizing challenges, numerous roadblocks, and more than a few long nights, Bonnie and Craig brought their baby home and found a new community along the way.

Everything looked good, but there was something wrong with him. Bonnie heard this phrase over and over again throughout her pregnancy with her second son.

“They kept telling me something was wrong with Raylan, but they never knew what,” Bonnie said.

While most parents remember counting fingers and toes looking at ultrasounds, Bonnie and Craig remember the chambers of Raylan’s heart. The doctor counted all four chambers, like a normal baby. He was progressing well. “Everything looks good,” Bonnie said. “That’s what they kept telling me, ‘Everything looks good.’”

Yet, the doctors could tell something was wrong with him, but they didn’t know what it was.

Raylan was delivered via C-section—and began gasping for air. Bonnie only saw him once before he was careflighted to Fort Worth two hours away leaving her to wait for any news about her baby.

Bonnie and Craig live in the small city of Wichita Falls, Texas, sitting on the border of Oklahoma. Bonnie’s mother was a nurse, but it wasn’t until she gave birth to her first son, Fisher, that she decided to go into nursing. “Just watching the nurses work, I was amazed by everything they did and the great experience I had with them,” Bonnie said.

Bonnie found herself sequestered in her hospital room for days recovering, waiting for news about Raylan. It was only after those initial days Bonnie and Craig were told that Raylan was diagnosed with hypertrophic obstructive cardiomyopathy, and soon after, severe mitral valve regurgitation.

Mitral valve regurgitation occurs when the heart’s mitral valve doesn’t close tightly enough, and blood flows backwards in the heart, making it even harder for Raylan’s heart to supply blood to his body.

Raylan was born during the initial surge of the COVID-19 pandemic, meaning only a limited number of family members were allowed in the hospital to support Bonnie and Craig.

Bonnie, Craig, and the doctors had to wait and see if Raylan would improve.

The team mentioned the possibility of putting Raylan on the list to receive a heart transplant, but it was something Bonnie didn’t want to consider.

They waited, and Raylan didn’t improve.

At seven weeks old, Raylan’s name was added to the transplant list. For Bonnie, it was heartbreaking. It was something she never imagined for her baby. The baby they said was fine, the baby they said had four chambers in his heart on the sonogram. Her baby now waited for a new heart.

“I’m sure every parent wants their child to be at the top of the list, but he was very, very sick,” Bonnie said.

ECMO and ventricular assist devices (VADs) are used for patients waiting for transplants, however, with his fragile health, Raylan was not a candidate for either.

After 20 days as 1B, Raylan’s status was finally updated to 1A.

“Waiting is your worst enemy; you never know when the call is going to come — it’s pure torture,” Bonnie says. “You’re watching your child die. It’s such a weird thing because a lot of parents wait to see if the treatment for their child works. But we’re sitting around waiting for this heart to become available.”

Raylan’s heart failure was progressing and he started to have arrhythmias. “When you bear down, you have a nerve and that causes your heart rate to slow down. This caused his heart rate to drop whenever he would cry, sleep; it would drop dangerously low,” Bonnie said. “And it would not come back up.”

One day, his nasal tube wasn’t taped properly, and with one tug the whole thing came out. Bonnie and Craig were pretty panicked because he didn’t tolerate it being put back in. The nurse came in to put it in, and he had a horrible episode. They checked the circulation of pressure on his back and head to see how he was perfusing blood and there was no perfusion to his brain.

His episode went on for 10 minutes. He had no expression; he was making a horrible rhythmic crying, according to Bonnie.

The doctors couldn’t put him on a machine or perform CPR because of his weakened health. They told Bonnie to hold Raylan to try to calm him down. “That was really bad. That was literally the worst experience of my life,” Bonnie says. “I thought, for sure, he was going to die, and there was nothing they could do. At one point, I was hysterically crying and begging somebody to help him because I was so upset.”

The doctors told Bonnie that anything could agitate his heart. They closely monitored him to evaluate how he responded. When he finally awoke he was pale and sweaty. He continued to have episodes.

The night before Thanksgiving, Raylan’s night nurse watched him in the ICU while Bonnie and Craig slept away from the hospital. Bonnie’s phone rang. She woke to find a number she didn’t recognize with a strange area code. She answered the call—it was the transplant coordinator—they had a heart for Raylan.

“My husband was in the corner sobbing as I took the call,” Bonnie said. “It was a bittersweet phone call, but now, your child might have a chance that you didn’t think he had.”

Complications began to mount during his transplant surgery. He was placed on ECMO for two days after surgery.

Shortly after his transplant, his kidneys started to fail, and placing him on dialysis was Raylan’s best option.

However, he bounced back, the doctors held off on dialysis, and Raylan began to wake up going into fluid overload, and he had to be urgently intubated. Just like the moment when he was born, he couldn’t breathe. He was intubated for a week.

Slowly, Raylan improved as his body adjusted to the new heart. “We were in the ICU for a while, and he was in the hospital for six months, with a lot of ups and downs,” Bonnie said.

Raylan is now completely unrecognizable to the baby he was in the ICU, according to Bonnie.

“He’s doing wonderfully. His ECHOs look amazing. His milestones are delayed because of his time in the hospital, but he’s getting there,” Bonnie says. “His heart is doing great.”

“He’s very particular. He’s used to people 24/7 and doing whatever he wants,” Bonnie says. “He’s very curious. He moves around a lot and wants to touch everything, look at everything—he wants constant entertainment. He’s really busy and constantly learning.”

Despite the numerous and severe complications and agonizing long days and nights, Bonnie said there were bright moments that fell into the worst time of her life. “It teaches you a different level of compassion and empathy for other people. You don’t ever think this is going to happen to you. You never understand how much medicine has progressed; it can take a heart that no longer has life and then they can put it in someone else and make it beat again.”

Bonnie is now surrounded by a community of families who have their own experiences with heart defects and transplantation.

“I love talking to people that have similar journeys—whether they had a transplant or a serious heart defect. It’s very comforting to know that other people are going through a similar thing,” Bonnie said. “I also want to try to make a difference in how the transplant waitlist places babies with Raylan’s condition because he almost died and they told us there wasn’t anything they could do. Hopefully one day they can change the listing process.”

Bonnie also wants more people to be aware of organ donation, including donations for infant patients. “There’s a lot of misconceptions about organ donation in general, and there are so many positive things about it and it can help a lot of other people.”

As for Raylan, Bonnie and Craig make everything he does a big deal. “I’m so proud of him—he’s just very very strong. Every little thing he does is a big deal because honestly, he shouldn’t be here, yet somehow he’s here. We’re just very, very fortunate.”