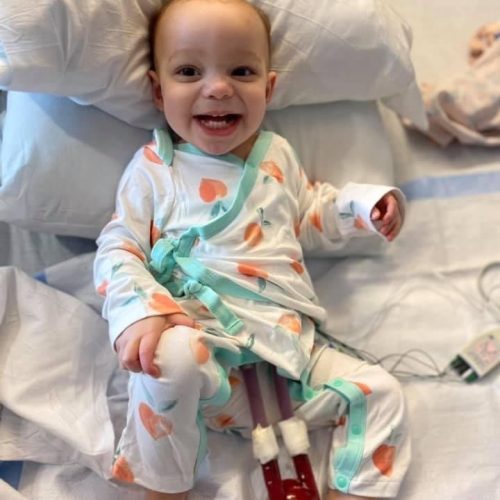 One weekend, Jimmie noticed his 16-month-old daughter, Brynn, was breathing strangely. One week later, Brynn was heading into surgery to be placed on a VAD. For half a year, Jimmie and his wife, Kristyn, waited by the phone for the transplant call. The family had many long nights, learned how to navigate their lives with a VAD, and finally reached the end of a dark tunnel.

It started one weekend when Jimmie noticed that Brynn was breathing heavily. Kristyn, who works as a nurse, reached out to her colleagues about Brynn’s symptoms, and the consensus was clear—her heart was failing. Jimmie and Kristyn took Brynn to the University of Kentucky hospital, and that evening, Brynn went into cardiac arrest. The hospital sent Brynn and her family to Cincinnati Children’s Hospital Medical Center for specialized heart care.

One week after being admitted, Kristyn and Jimmie found themselves discussing placing Brynn on a ventricular assist device (VAD). A few hours later, Brynn headed into surgery and placed on the Berlin Heart EXCOR® Pediatric VAD. A VAD is a mechanical pump surgically placed in a heart to help deliver blood to the body. VADs are often used as a temporary solution to ease symptoms while waiting for a donor heart to be ready for transplant.

After hours in surgery, Kristyn and Jimmie could finally see their daughter with her newly implanted VAD, keeping her heart going as she slept in the large hospital bed.

“I was terrified,” Kristyn said. “Everything really set in when we had to sign the VAD consent forms.”

“It really threw me for a loop,” Jimmie said. As he walked into the room, he recalls noticing the size of the tubes compared to Brynn’s small body.

Over time, the Warren family became acquainted with life with a VAD. Soon, thanks to the nursing staff, Jimmie became comfortable with handling the VAD in his daughter’s body and understanding her blood pressure readings.

Her care team organized activities to break up the monotony of the day inside a hospital room. Eventually, Brynn’s family and care team developed a plan for getting Brynn outside.

“It was a big thing for Brynn to go outside—everyone had to be ready,” Kristyn said. The VAD charges for four hours, so she could only get out of the room about two times a day, each time for no longer than 30 minutes. Despite the limited time, it was during these walks that Brynn began to blossom. When she arrived at the ICU, Brynn wouldn’t let anyone near her other than her parents. She now greets strangers as she walks through the hospital halls with her parents.

After 127 days of waiting for a transplantable heart, the Warren family got the call.

Kristyn heard from other transplant families that the call usually comes in small hours of the night, so she left her phone ringer on every night. At 8:30 in the morning, the Warren family got the call—there was a heart ready for Brynn.

“The light at the end of the tunnel goes from a mile away to all of a sudden in your face,” said Jimmie.

After long days and nights, walks around the hospital, complicated discussions with doctors, a few hard decisions, and a lot of waiting, the Warren family can finally look back on their VAD journey. Their advice to other VAD families is that while it is a long and challenging journey, it is a marathon, not a sprint. There is, eventually, an end in sight—for them, there was a light at the end of a long, dark tunnel.