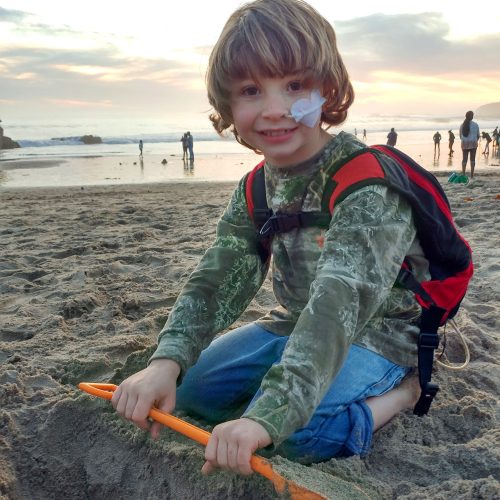 See the third part of our "A Family of Big Hearts," featuring the youngest sibling, Gabe.

The third part of our story begins when Sierra received a second heart transplant. After three months and various IV therapies, April of 2015, she was placed on the transplant list due to coronary artery disease and antibody rejection. She received her second transplant June 16, 2015.

Meanwhile, our youngest, Gage, was being seen more frequently by the doctors. Due to unusual and irregular heart rhythm’s occurring more frequently, the cardiac team felt he needed a defibrillator in addition to his pace maker. We were hesitant for this surgery, his heart was continuing to enlarge and weaken and the surgery could worsen the problem. He went to surgery August 25th. After a long recovery Gage was able to return home, but he never quite fully regained his health.

At home Gage’s condition continued to decline. A month after our return home, the all too familiar symptoms of nausea, vomiting, loss of appetite, fatigue and difficulty breathing intensified. Gage was our third child to be admitted to Stanford and placed on the transplant list. A device that was in trial when we left with Lindsey in 2013 was now used frequently at Stanford. The doctors felt Gage could be a candidate for a device called the “Heart Ware”. With this device, Gage would eventually be able to leave the hospital and live with us at the Ronald McDonald House near Stanford. We were ecstatic at the possibility of Gage being out of the hospital while waiting for transplant after spending 9 long months with Lindsey unable to leave during her wait.

Just before Christmas 2015, Gage was released from the hospital and moved into the Ronald McDonald House. Gage wore a backpack which contained the lifesaving HeartWare device. Again, we moved all our children to California and enrolled them in public schools. For 512 days, we attended school, challenged doctors with new ideas, and had plenty of excitement with Gage’s VAD and technical difficulties. Jason flew back and forth to Oregon for work.

We attempted to give the four other kids “normal” experiences by signing them up for local summer camps, sports and other activities, as well as continuing checkups with our other two transplanted daughters. We met more families going through similar experiences living at the Ronald McDonald House, and we became a support for each other. We also made more friends in the community around us as our kids became more involved in community activities. California was becoming our second home.

Day 512 of being on the transplant list, April 5, 2017, Gage received his transplant. He was not as excited with the news as his sisters were, he had seen them go through surgery and he was very scared. He made it through his transplant surgery without difficulty. He had a few bumps the first few weeks after transplant, including seizures and major rejection, but has been great ever since.

California is our second home, the doctors, nurses, social workers, nurse practitioners have become our second family. We are always happy to go VISIT, but not stay.