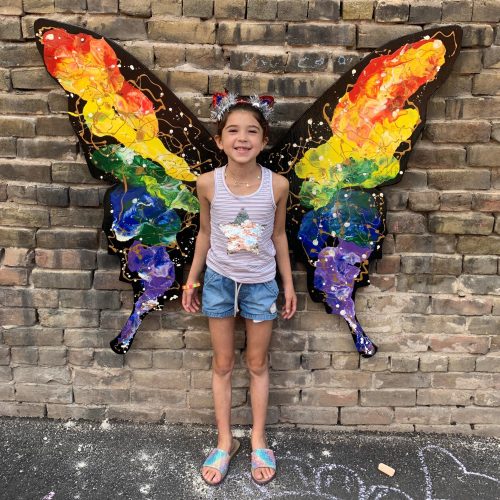 At 11 days old, Juliana waited for a new heart while her mother, Riki, fought breast cancer. Together as mother and daughter, they faced unexpected challenges, braved mounting treatments, endured long waits and recovery. Now, Riki shares their story in thanks to the community of support they found along the way.

Riki was pregnant, and working in healthcare. She had a son, Ben, with her husband, Chris, who was in the military. When she married Chris, she gained two step-daughters, Ebony and Olivia.

Chris and Riki were in-betweeners in Texas—“kind of living in Corpus Christi.” With Chris’ military assignments, he worked in a town about eight hours away and commuted frequently.

Before planting tentative roots in Corpus Christi with Chris, Riki lived in a small town. She felt a lump in her breast and went to get it checked out by the town’s doctor. The doctor thought nothing of it, and Riki nearly forgot about it.

When she went to her appointment to confirm her pregnancy in Corpus Christi, she off-handily mentioned the lump to her doctor. She suggested Riki have it examined.

“I was diagnosed with breast cancer on my 38th birthday when I was about six weeks pregnant with Juliana,” Riki said.

Riki went to the M.D. Anderson Cancer Center for her oncology appointments and worked with Texas Children’s Hospital to confirm any cancer treatments were safe for her baby.

Around the end of her first trimester, Riki and Chris went for a natal anatomy ultrasound. As the scan progressed, the providers began searching for the heart and were unable to locate it—and the images they did take were inaccurate. Riki knew something was wrong.

It was at that time she and Chris were told they were having a girl—which they already suspected. “How could you have breast cancer and not have all this estrogen?” Riki said.

After the anatomy scan, Riki went to a fetal cardiologist at Texas Children’s. “The doctor told me she had hypoplastic left heart syndrome,” Riki said.

A type of birth defect that affects blood flow in the heart, hypoplastic left heart syndrome occurs when the left side of the heart does not form correctly in utero.

Riki’s doctors told her she could no longer become pregnant because of the excess estrogen in her body caused by the tumor—Juliana would be her last pregnancy.

Every month, Riki went to Texas Children’s for fetal cardiology appointments to monitor Juliana’s heart. During the third trimester, her heart began to rapidly decline, and Riki was admitted to the hospital for surveillance. Chris was able to take time off of work to be with her.

Further imaging revealed that Juliana’s mitral valve and her aortic arch were severely malformed, meaning her hypoplastic left heart syndrome was quickly becoming more complex. Her doctors suggested that after her birth, Juliana undergo surgery to convert her heart to a single ventricle.

“We were inpatient for about two and a half weeks at Texas Children’s,” Riki said. “And every time we had an echocardiogram, it was looking worse and worse. Her heart was just really sick.”

Before she was even born, Juliana fought for her life. She was delivered via emergency c-section four weeks before her due date.

“I got to look at her and touch her, and then she was whisked off to the ICU,” Riki said as she remembers an onslaught of doctors and nurses crowding the room, working over her tiny baby, born into the world earlier than expected.

Moments after her birth, Juliana was intubated and placed with a feeding tube. With her own post-partum surgery to deal with, Riki couldn’t see her daughter for 20 hours after the birth. Chris stayed with Juliana, trying to Facetime Riki over their phones. She waited alone in her hospital room until she was delivered the news: extra testing revealed that Juliana’s heart was in worse condition than initially thought.

Juliana’s heart was so structurally malformed and the muscles so weak, the doctors didn’t think she could survive a single ventricle surgery. If they put her on a bypass, there was a good chance that her heart would not start beating again, according to Riki.

The chief surgeon told the family they could take Juliana home for end of life care. As the surgeon got up to leave, trying for a transplant was mentioned, hesitant, as transplantable hearts for babies are rare, and patients usually wait a considerable time for one to become available.

“We were devastated by that, but we went and talked to the transplant team,” Riki said. “We were going to try. We were going to give her every shot. Why would you not at least try?”

The team decided Juliana was a candidate for a transplant—and that her family would be good stewards of the donated organ.

Riki no longer cared about the lump forming in her breast. All of her treatments, oncology appointments, and medications were no longer her priority.

“As a mom, you just forget everything. If I could have given her my heart, I would have. My husband felt the same way,” Riki said. “I just wanted to do what I had to do [for my cancer treatment] and then focus on her.”

Juliana was placed on the transplant waitlist at 11 days old and waited five days for a viable heart.

Christopher passed away after a traumatic birth and suffered brain damage. His family donated his organs, but his heart was the only one that could be recovered.

Even with Christopher’s heart, there was a 50/50 chance of Juliana surviving a transplant surgery. The lead cardiologist was reluctant to operate on her as he was unsure if she was healthy enough to survive the complex surgery.

Christopher’s heart began beating as soon as the surgeon placed it inside Juliana’s body.

However, when Juliana got out of surgery, the doctors told Riki and Chris that she was just as sick as before the transplant—all they could do was wait and see how she progresses.

“It was a really scary time,” Riki said.

Soon after Juliana’s transplant, Riki got a call in the middle of the night. Juliana spiked a fever.

A night nurse, Vi, caught the fever as soon as Juliana began showing symptoms. Vi had taught Chris and Riki how to bathe Juliana in the ICU only a few days before.

“They told us that she was very sick,” Riki said. However, since the fever was caught early, the doctors went through all the protocols, and she was going to be okay.

“We really trusted Vi when she was there with Juliana,” Riki said. “She was watching Juliana so closely that she knew the minute that she spiked a fever, and she alerted the team—that was a moment that really sticks out to me because it made a huge difference in saving her life.”

She was discharged just six weeks after the transplant. She didn’t have any complications, such as breathing issues, usually associated with post-transplant recovery. She came home and started physical and occupational therapy, and the family attended many doctors’ appointments in the first year of Juliana’s life.

At two years old, Juliana began daycare—meaning she encountered all the viruses and illnesses every kid gets when they enter classrooms, such as the fast-spreading cold and stomach flu. While these are usually brief nuisances to families, these common infections can become serious when afflicting children with medical complications like Juliana. “We had 20 hospital stays for infectious diseases,” Riki said. “But the older she gets, the stronger she gets.”

After Juliana’s birth, Riki started radiation every day for six weeks. Chemotherapy is safe for pregnant women, but she did not feel comfortable receiving it while pregnant. The therapy took its toll on Riki’s body postpartum.

“The radiation is killing all these healthy cells,” she says. “So your body is trying to replenish and make more healthy cells, and it was really exhausting with a brand new baby who was feeding. I knew that I had to get better.”

Juliana’s arrival into the world was full of surprises. Beginning with breast cancer, discovering a malformed heart, being born a month early, receiving a rare heart, spiking a fever in the middle of the night, and finally going home a month and a half after transplant surgery. One thing that wasn’t a surprise was Riki having a girl.

Children’s Miracle Network chose Juliana to be the local hero of the year for 2022, representing Texas Children’s—which meant she got to participate in a photo shoot, which she adored, according to Riki. She’s spirited and strong-willed. “People are always laughing along with her funny personality and how sassy she is.”

Juliana is now stepping into Riki’s world. She recently started horse riding lessons, a passion she shares with her mother.

In 2020, under the watchful eye of health supervisors, with social distancing and safety protocols in place, the family met Christopher’s family—the family that decided to donate their son’s heart to strangers.

“It was really special,” Riki said. “We ended up having a wonderful time. It was just really cathartic being able to say thank you in person and for them to see they gave a beautiful life to this little girl.”

Soon, Juliana will participate in their daughter’s quinceanera, serving as a ceremonial little sister.

In Juliana’s room, hanging on the wall above her bed is a picture of Christopher—the boy whose heart gave Juliana life as soon as it was in her chest.