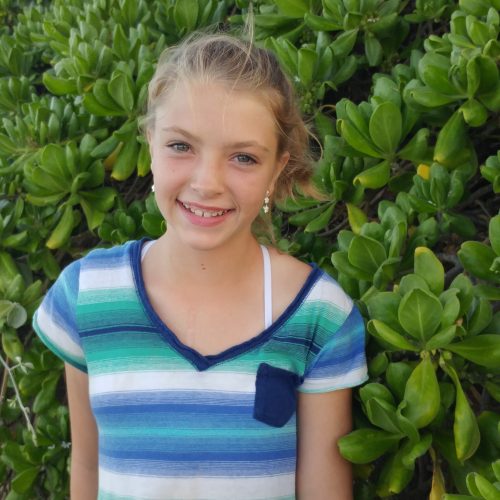 Read the second part of our "A Family of Big Hearts," featuring Lindsey.

Part II of our story began in May of 2012. Sierra had some minor rejections, but for the most part was doing well for the last 6 years post-transplant. Lindsey, our 3rd daughter, who was eight-years-old, started complaining of her stomach hurting. We took her to a pediatrician and who explained, that she was constipated and needed stool softeners. When Sierra was diagnosed, we had our other two children echoed as well as my husband and I and we all had regular hearts. After our two boys were born, Hunter in California, and Gage two years later, they were echoed as well with normal results. We were told that Sierra’s dilated cardiomyopathy was idiopathic, meaning they did not know the cause. Knowing all our kids were healthy, constipation sounded like an easy fix for Lindsey. However, the stool softeners helped for a little bit, but eventually her stomach aches returned. I received a call from school one day that Lindsey had thrown up, I remember being in shock and thinking, “Certainly this is not the same thing Sierra had.”

Lindsey wanted to sleep in our room on the floor that night. She stacked a bunch of pillows on top of each other and said she slept better when she was upright. The next day we took her to the ER and asked for a chest x-ray. I will never forget when the doctor came in the room and wanted to know more about her older sister who had had a transplant. He told us that Lindsey had the same thing. Lindsey started crying and said over and over, “I don’t want a transplant, I don’t want a transplant, my tummy isn’t hurting anymore, let’s go home.” I started sobbing as the memories of the nightmare we went through with Sierra came flooding back to my mind. Having to repeat it all again: the vomiting, the crying in pain because of the stomach aches, too tired to do anything, the coldness, blue lips and the fear of losing her.

On May 30, 2012, Lindsey was life flighted from Boise to California. The familiar faces we came to know with Sierra were a welcomed sight. But the concern was felt by all the staff. Lindsey was placed on the transplant list and seemed to be deteriorating faster than Sierra did. After Lindsey’s diagnosis, Stanford reechoed all of our family. They found that Gage, our youngest, had the early signs of cardiomyopathy as well and our other two children had markers that they watched closely. Feeling overwhelmed was an understatement. Shock set in as the thoughts of having to possibly go through this repeatedly and possibly with each child felt daunting. I remember deciding that they were not all going through a transplant right away, and Lindsey was the one that needed our attention at that moment. Lindsey was placed on the Berlin Heart on June 28, 2012. At that point, it was FDA approved, the doctors knew a lot more about it, and the surgeons were more experienced than they were 6 years prior while Sierra was waiting for her transplant.

In August we moved our whole family again to California and enrolled our kids in the local public schools. Lindsey needed her siblings for distraction, support and to socialize with. She could never leave the hospital. My husband or I would spend the night with her in her hospital room, while the other spent the night with the rest of the kids at the Ronald McDonald House. We met more families in similar situations, some on Berlin Hearts as well, others waiting for transplant. Life-long relationships were made, as we supported each other.

Lindsey started third grade in the hospital school and met kids there. She would meet other Berlin kids and saw them get their hearts and move on as she still waited. Halloween, Thanksgiving, Christmas, New Year’s all came and went and she still waited. We made a routine every day that helped the time pass. Having school was very helpful and when there were holidays it was really rough. We didn’t have anywhere we could go except Lindsey’s hospital room and the hospital play room. Finally, after 240 days on the transplant list, Lindsey received her heart on Valentine’s Day 2013.

In 240 days, the nursing staff became our family. The doctors and nurse practitioners took our pleas for a little more freedom and would try and adapt for our circumstances the best they could. The Occupational Therapy and Physical Therapy team that worked with Lindsey on a weekly basis became her BFF’s. We felt so much love and support from all the staff at hospital and the Ronald McDonald House. One year from the day Lindsey was flown to California, we returned home as a family, with little understanding that we would again return two years later for our next transplant experience.