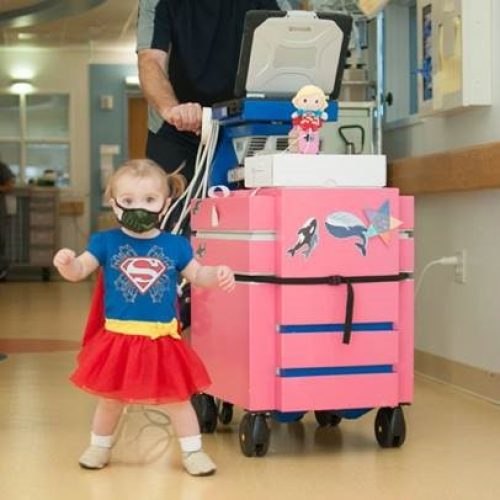 Hana was our first child, born perfectly healthy and normal. In February 2015, at six-months old, she had some minor coughing and occasional vomiting. We thought she just had a mild virus but the symptoms persisted over several days and something felt “not quite right”. We took her to the pediatrician who had the good judgement to order a chest x-ray which showed that she had an enlarged heart. We were stunned and scared.

Things started happening quickly. Hana was whisked off to a nearby hospital but her situation was so severe that they life flighted her to Lucile Packard Children’s Hospital at Stanford, amidst talk of her needing a heart transplant. We were reeling – exhausted, shocked, heartsick and stressed. Twenty-four hours ago our baby had mild virus symptoms and now she was intubated and needed a new heart. How could this be true?

The next morning they started talking with us about heart transplants, a device called a Berlin Heart, and a disease called dilated cardiomyopathy. But Hana surprised us all by improving enough in three weeks that she was able to be discharged from the hospital but still under close supervision and frequent visits with the pediatric cardiologist.

Life at home was not easy. It was a whole new world with a feeding tube and lots of new medications. She still threw up at least once a day and we had to watch her fluid intake very, very carefully. We tried to carry on with life as normally as possible.

When Hana was 15-months old and almost walking, we noticed that she was breathing funny and we rushed her to the Emergency Department where we found out that her left lung had collapsed under the weight of her enlarged heart. This time she was unable to recover and it was decided to place her on the ventricular assist device, a Berlin Heart mentioned to us months earlier, to help her survive until a donor heart became available for her.

Hana had her first open heart surgery for the Berlin Heart three days later. Then the wait for a new heart began and my husband and I basically lived in the hospital as we raised our daughter under constant medical care.

After almost six months on the transplant list we got the call that a donor heart was available! Hana received her new heart on May 28th. Two weeks later, after seven months in the hospital Hana was discharged with her new heart – life’s second chance. We lived at the Ronald McDonald House for two more months and then, one week before her second birthday, we were cleared to move back home after being away for nine months.

It took a village of people – a community of medical professionals, researchers, friends, family, neighbors, well-wishers and, of course, the amazing donor family to get us, to get Hana through it all. But this isn’t the end of the story, it’s really just the beginning.