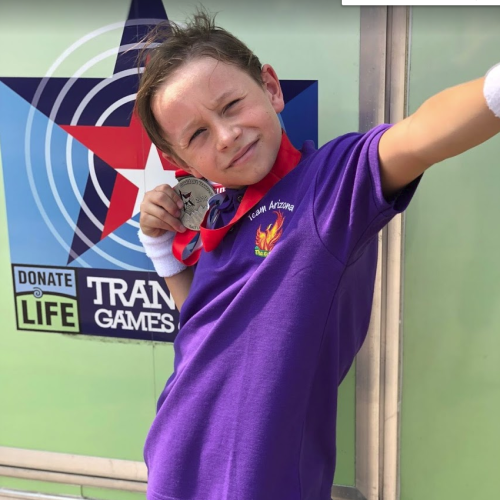 Read about Dylan's journey and his heart transplant success.

Dylan’s story almost started as a tragic one.  He was born with a potentially terminal condition, an enlarged heart, which is technically called Dilated Cardiomyopathy.  We were advised that 1/3 with this condition get better, 1/3 stay the same and 1/3 get worse and require a heart transplant.  Our first hospital stay had us in the hospital for a month.  We were hopeful.

The week before Thanksgiving, Dylan got very ill again and needed to be hospitalized for another week. I knew the conversation about transplant evaluation would be coming up again. Dylan seemed to be part of the 1/3 of cardiomyopathy patients that got progressively worse and required transplant. We would go to Children’s Medical Center in Dallas, there was no transplant center in Phoenix at the time and we have family there.

Even through Dylan’s diagnosis was very bleak his team was incredibly supportive.  His heart was taking up 83% of his chest cavity, which was pushing all his other organs down.  Because his heart was laboring so hard, his frail little body was starting to go into multi organ failure.  He couldn’t hold down food.  All of his body’s energy was going to support his heart.  His breathing was heavy, and he required oxygen. Upon completion of transplant evaluation, he had been immediately admitted to the ICU. A few days later he was listed to receive a heart at the highest status, 1A.

Dylan struggled to survive for weeks in the ICU.  He was placed on the list to receive a compassionate exception for the Berlin Heart.  At this time, it wasn’t approved for pediatrics.  We were incredibly hopeful that he would be approved.  When we got word that he was, we were thrilled and hoped that the device would be delivered in time to save his life.

By grace, we were fortunate to get “the call” on January 13th, 2009 at 3:00 in the morning.  I called my husband and told him to get the first flight out of Phoenix. Our amazing ICU team gave Dylan a standing ovation on his way back to the operating room.

In the background, there was another large team of doctors, nurses and others, helping another family through the most tragic moment of their life and they decided in that most horrible of moments to give.  To give life even as it was taken from them. We now know and love that family. We honor their son in his gift to ours.

Dylan’s surgery and recovery was an amazing success story.  After 3 months recovery, we were allowed to come back home to Phoenix.

Today, Dylan is 11 years old and in 6th grade. He is incredibly active in sports. He runs cross country and wrestles competitively and he just signed up for flag football.  This past season he won 5th in the state for his weight and age.  Last summer he was honored to represent Team Transplant Arizona in the 2018 Transplant Games of America in Salt Lake City. He brought home 2 gold, 1 silver and a bronze. He looks forward to competing in the 2020 games in New Jersey.

These days, Dylan enjoys school, playing sports, being with his friends and volunteering his time to help others with many of his favorite causes (Team Transplant Arizona, Transplant Families, COTA, Phoenix Children’s Hospital, Make A Wish and HopeKids).

His mom spends quite a bit of her time helping with ACTION in the hopes of a better tomorrow for other children in heart failure.